Season 1 Join Mothie on their journey to become more creative, more curious, and more connected to their community and to the rest of the world. A diverse podcast focused on blue sky thinking, niche subject matter, and out of this world conversations. 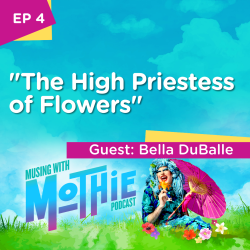 The High Priestess of Flowers With Bella DuBalle

Guest Info: Bella Duballe is an actor and drag artist from Memphis TN. Known for being a former Miss Gay TN, The host of popular drag program The War of The Roses at The Atomic Rose, and for once being voted one of the sexiest women in Memphis!!! She is big sister to all and second to none. Did somebody order a giant woman?

Bella and Mothie sit down for a truly in depth and insightful conversation about their lives as entertainers in TN and how this place filled with beautiful souls has changed their lives. Two awesome personalities and longtime show directors give a peak behind the curtains of their imaginations while also keeping it real!!!!

This episode of Musing with Mothie was brought to you in part by our partnership with Planned Parenthood TN and their freecondomstn.org program! Thank you to our other friends at Ounce of Hope for helping sponsor this extra brillant episode!!! 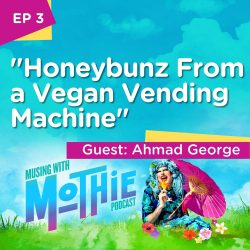 “Huneybunz From a Vegan Vending Machine” with Ahmad George

A spacey and brilliant set down with Painter Ahmad George to talk about Memphis, Art, Life, and the Universe! A dive into their process and current projects from residencies to the expanding body work work known as Free 99!

Become a supporter of the Musing with Mothie Podcast today! 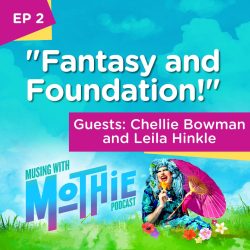 Fantasy and Foundation with Chellie Bowman and Leila Hinkle

In this episode Mothie explores what it is like to be a queer writer in the south with Chellie Bowman and then dives into the nonprofit deep end with Leila Hinkle to talk about how a nonprofit can grow and support new dreams in the lgbtqia community in the Midsouth! Learn more about the Prism Pages, The Focus Center Foundation, and about citrus fruit!!!

Become a supporter of the Musing with Mothie Podcast today! 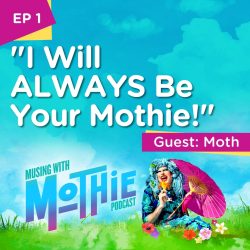 I Will Always Be Your Mothie

Meet your host for Musing with Mothie, Moth Moth Moth! This genderqueer drag artist and writer is always getting herself into crazy shenanigans while working to have more fun and build a sense of community that spans the galaxies! Join us on a journey to become more curious, creative, and connected!