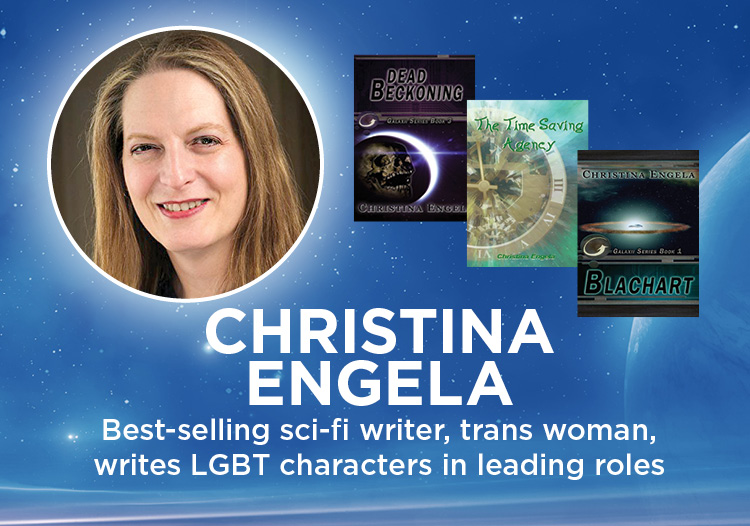 LGBT characters, in Engela’s work, follow narrative arcs that occasionally intersect with their sexual or gender identity, but are more often driven by the human characteristics shared by all people—hope, fear, ambition, humor, and love.

The books featured in the image above are just a few of the many books that Engela has written. She writes in the science-fiction/fantasy genre, and occasionally dabbles in horror as well. She has 12 complete books to her name – including a ‘how-to’ book about VW Beetles, a children’s book about bullying, and ten fiction titles.

Since childhood, South African writer Christina Engela has been using science fiction to write the world the way she’d like it to be. But it wasn’t until the late 1990s, when she was struggling to accept her own identity as a transgender woman, that she began to include LGBT issues in her writing. That story, Beyond, is about a transgender woman in the military about to embark on a mission out of the solar system when her space fleet discovers that she is transgender and tries to recall her. For Engela, the story was an argument for acceptance. It was a roadmap through the emotional challenges she feared might lay ahead. It was the beginning of her LGBT inclusive science fiction writing.

Like the lead character in Beyond, Engela was in military service. South Africa has a compulsory year of military service for all young men after high school. When her year of conscription was up, the economy was circling the drain, so Engela stayed on. Unlike her Beyond heroine, Engela didn’t have the option of pursuing missions into space and settled instead for a position first as a transport guard and later as a computer technician. In the evenings, she did what she had always done—wrote tales of science fiction adventure.

When Engela began her transition in 1999, she wasn’t sure how to discuss it with her supervisors. So, one day she just stopped wearing her uniform and instead showed up for work dressed in women’s clothes. When she got called into her supervisor’s office, she was certain she was about to be fired. The colonel who had called her in said they had been hearing stories and wanted to know the truth. She took a deep breath and told him about her transition, and to her great surprise, the colonel took it very well. He didn’t balk. He didn’t fire her. He did, however, assign a lieutenant to help her pick out clothing that would be more work appropriate.

Engela’s appreciation for the humor of life carried her through the years of transitioning not only her own person, but also the expectations and understanding of those around her. Once, after Engela had repaired a man’s computer, the man called her supervisor to complain that “that thing” had been sent to his office. Engela’s supervisor listened to the man’s complaints and then hung up the call. He reassured Engela that he wouldn’t be sending her or anyone else to repair the man’s computer until he learned to apologize.

Engela’s eye for the quirky humor of even the darkest situations sets her writing apart from the masses. Her fiction combines oddball humor, in the tradition of writers like Terry Pratchet and Douglas Adams, with the best of traditional science fiction. A government agency regulates time and its manipulation against the efforts of a brilliant scoundrel. A retired space cop turned bounty hunter grumbles and grunts like a classic pulp noir detective. A glamorous retired intelligence agent moves to a new planet in the hopes of escaping the mystery and mayhem of her former life. And tucked inside her stories, like a kind of stealth activism, lurks a beast almost never seen in either mainstream or science fiction: fully fleshed out LGBT characters.

Like many of us, Engela has been frustrated with the representation of LGBT characters in mainstream fiction, where gay characters are often nothing more than superficially portrayed plot devices or worse, the object of satire and ridicule. Engela’s work breaks the trend. In her stories, a gay man may be the anti-hero or villain, but not because he is gay. A transwoman may fall in love with a cisgender straight man, and their relationship doesn’t revolve around her gender identity. LGBT characters, in Engela’s work, follow narrative arcs that occasionally intersect with their sexual or gender identity, but are more often driven by the human characteristics shared by all people—hope, fear, ambition, humor, and love.

Engela’s work can be purchased online via Amazon or directly through her website christinaengela.com/. Her story Beyond was recently published in For Love of Leelah, an anthology created to honor the spirit of Leelah Alcorn, a young transwoman whose suicide shook the worldwide trans-community in 2014. The anthology is available on Amazon, and all proceeds go to support The Trevor Project.

Give OUT Day is Here!

Original Memphis: Memphis in May