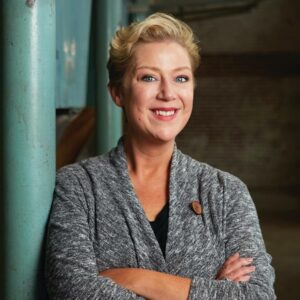 Is a writer/performer/video editor/producer/LGBTQ+ ally who was born and raised in Memphis. She’s the Director of Communications for Planned Parenthood of TN and & North MS.
All Posts

This Chattanooga-based queer pop diva has a helluva story to tell — and she’s ready to tell it to the world.

In Jenna DeVries’ Instagram bio, she identifies as a “Queer Pop Diva” and, due to my tireless investigative reporting style, that’s about all I knew about her walking into this interview. In the first 15 minutes we spoke, though, she filled me in on a lot about her journey to Queer Pop Diva-DomTM. She told me about making music since she was able to talk, writing and recording her first EP at 15, getting discovered by American Idol (ultimately reaching the Top 24), and then moving to Nashville to start her career as a country music artist. But I’m cutting all that stuff out for the sake of space, gentle reader, because here is where I think my interview with singer/songwriter Jenna DeVries really begins:

Jenna: So I was raised in kind of a… fundamentalist cult situation.

Yeah. Married off at 19 kind of a thing — very sheltered. I wasn’t allowed to interact with “secular music” as they call it, so growing up I was constrained in what I was allowed to interact with and hear. Going out to California to be on American Idol was the first time I’d ever gone anywhere by myself. I was still married to a very abusive man at the time, so there was a lot happening all at the same time.

Good god, that is intense.

It was bananas. Where I came from, Hollywood was full of sinners, you know? It was where “the devil worked in the corners to pull you into the darkness.” But then I got out there and realized this was actually everything I’ve always wanted.

Because of my upbringing, my coming out happened later. I think as kids, especially gay kids, raised in these super fundamentalist conservative homes — you don’t have a word for it if you never see it. I didn’t have any gay people around growing up. It was something that was hardly even talked about, much less a part of my existence. And back just a few years ago, country music was not the most welcoming place for gay artists. I have a lot of friends who are country artists in Nashville that still to this day have not come out. When I was making the decision to start publicly releasing music, I had to sit and ask myself, “Am I okay with hiding this part of who I am?”

So I took the entire country EP I’d just recorded, shelved it, and moved into the pop sphere. I felt that trying to be a gay country artist would have continued the trauma of having to be in the closet. I needed an outlet to be out and loud and gay and proud because that was not something that was ever given to me earlier on in my life.

The tracks you sent me from your upcoming album Irreverent are fantastic — and this is coming from Meemaw who rarely listens to music made after 2003. I was hearing Brandi Carlile, Tori Amos, even Natalie Merchant from 10,000 Maniacs. Who were your musical influences when you were writing these songs?

For me, the biggest thing about the new album was being able to solely focus on the songs and the vocals — the fundamentals. So I listened to a lot of Fleetwood Mac, a lot of Stevie Nicks, some Bonnie Raitt, even Pat Benatar. I’m also a huge fan of Lady Gaga. Listening to her Joanne album and hearing the stripped down and honest pieces in that album, then listening to Taylor Swift’s newest release and how she came back and found that middle ground between pop and country, that was really inspiring to me, too. Oh, and Florence and The Machine is always an inspiration! I’m obsessed with big vocalists.

It was interesting to me how your new songs are seamlessly genre blending. They can start off sounding like a country song and morph into a driving blues song midway.

That’s the thing with this album. I decided to not care about where it was necessarily going to fall. These are songs that I’ve written that I think are really special. It’s been really freeing for me to not worry so much about if a song is going to be trendy on TikTok and more about if it’s a great song that people are going to want to listen to over and over again.

Based on what you sent me, a lot of Irreverent feels like the soundtrack to a deliciously dramatic breakup. But, that said, I think my favorite track was Everything You Are, which didn’t fit the “standing outside my ex’s house in the pouring rain” vibe of the others. What’s the backstory on that one?

(Laughs) Yes, you probably noticed that sad songs come more naturally to me. I always tease my wife by saying, “You know, I never wrote a happy, upbeat song until I met you.” I’d never really written love songs about anyone until I met my wife. I wrote Everything You Are when we were first seeing each other and no one knew we were together. It’s an anthem to being just completely wrapped up in everything about a person.

Do you worry that you’re going to lose your edge with your sad songs now that you’re happy?

That is the most incredible question. Yes and no. I think as a songwriter, part of the storytelling element is looking back on things in your life or looking at other experiences that other people are having around you and drawing from there as well. It’s such a universal thing if you’ve ever been in a relationship that was intense.

Okay, that brings me to your song “Memphis.” I live in Memphis, was born and raised here, and I MUST know: why the hell aren’t you ever coming back to my city?!

(Laughs) “Memphis” is really funny to me and is one of my favorites. I wrote it with my dear friend, Tim — just him, a guitar, and me drunk off my ass when we wrote it. I started playing it out at songwriter rounds and other songwriters would come up to me afterwards and be like, “When is that coming out? Holy shit, I love this.” But it’s actually written about a guy that I was with for a while and a weekend trip we took to Memphis together. On that trip, I told him that I loved him and he did not say it back. So it was using Memphis in a metaphorical sense, like, “I can’t go back to Memphis. I can’t do this one more time.”

So you’re saying this song is not a bad endorsement of my city.

No, not a bad endorsement at all! I love Memphis!

So, I hear you’ve traded Nashville for Chattanooga these days?

Yes, I lived in Nashville for a long time. I have a lot of good things to say about it and a lot of bad things to say about it, too. You know, it’s the Bible Belt, and there are certain areas of Nashville that just aren’t friendly to people like us. So that was part of what moved us to Chattanooga. The community here is more diverse and less segregated, so it’s just been a better fit for us all around.

I hear you’ve got a Halloween record release concert coming up in Chattanooga at [checks notes]…an abandoned textile mill? That sounds intriguing and spooky.

Yes! There’s a group in Chattanooga called the Pop-Up Project and they are kind of the heart and soul of the artistic and music community. They are doing this big, over-the-top Halloween party in an abandoned warehouse called Coosa Mills that is currently being redeveloped. They want to get people into the space and excited about what it’s going to become for the community. I immediately said yes when they asked me to play. Then I kept thinking about how this event is taking something old and transforming it into something new, so I asked them if I could debut my new album there. I think it’s going to be a really beautiful, full circle, old and new homecoming moment.

Jenna DeVries’ new album Irreverent drops in early 2023, but you can watch her perform it live at Haute Halloween with Jenna DeVries in Chattanooga on October 29th.

Check out Jenna DeVries’ Queer Pop Diva-domTM for yourself: she’s
@devriesmusic on IG,
@ThisIsDeVries on FB, and DeVries on Spotify.

Purchase tickets for the event at eventbrite.com/e/haute-halloween-with-jenna-devries-tickets-381818859487.