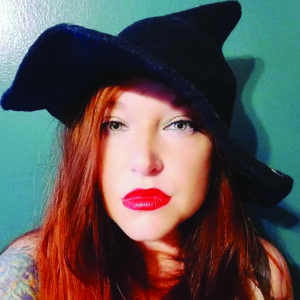 Is an applied anthropologist and has lived in Memphis for 16 years.
All Posts

(Above photo: Dianne Davidson on the set with Linda Ronstadt, toured with Ronstadt’s band, and has provided backing vocals for B.B. King, Jimmy Buffet, Tammy Wynette, and Barry Manilow.)

OutHaus Films is a production company started by T.J. Parsell and Bill Brimm. OutHaus originated from an idea to celebrate the lives of a group of LGBTQ+ singers and songwriters who navigate the male dominated landscape of southern music industries. Invisible and Gender Line are two films that explore these artists’ personal and professional journeys. T.J and Bill share their experiences with working with these artists and why their stories are so courageous and important for us to know.

Can you tell me about yourselves?

Bill Brimm: I’m Bill, and I’m the producer at OutHaus Films. I am a visual artist and co-owned a stained glass business for 40 years in Nashville.

T.J. Parsell: I’m T.J., and I’m a filmmaker, and the Director at OutHaus Films. I was in software for 20 years and spent another 20 years working in prison reform. I went to film school at 50, and I have been focusing on using film for social change.

How did OutHaus Films begin?

Bill: I am friends with several gay women who are based in Nashville and had been writing country music since the ‘70s for major artists. They are so talented and had beautiful voices, but they had been unable to be fully out in the country music scene. I realized that there was so much to their stories that was untold. Being out, gay women in the country music industry that is mainly for straight men was very hard. They kept their sexualities to themselves for most or all of their careers. After T.J. moved to Nashville and we became friends, I brought him the film idea. OutHaus Films is a production company born of the celebration of these women and their experiences in the southern music industry. The final film is called Invisible.

T.J.: People can be moved so deeply by film. It is the key to capturing hearts and minds. As Bill and I shared, there are two things that don’t usually go together: gay women in county music. I was born in Michigan, lived in New York for 30 years, then Florida, then finally to Nashville. I’m not a southern boy, but I was very intrigued and inspired by experiences of gay women who had to forge a career in an industry that lacked so much inclusion, diversity, and support. Bill had the idea, the friendships, and I had the technical skills to make this documentary idea come to life. Since that moment, we have connected with many artists, filmed a documentary, a short, and it’s been shared with 19 festivals and won 3 or 4 awards. The Washington Post covered the film, we screened it with 2,000 women on an Olivia cruise to Alaska, and it’s being used for educational outreach. It’s been shared in Australia and Canada, the Big Sky Film Festival, and will be screened at the Frameline Festival in San Francisco in June 2021.

Can you tell me some more about the women represented in your film and how you got started?

Bill: Some of the women were hesitant at first, but so many stories opened up once we began filming. There was so much being shared.

T.J.: Some of the women who are more current in the scene turned us down. And managers didn’t always want them to be in the film; they worried about how being public with their sexuality would impact their career. We wouldn’t have gotten started on this documentary at all if it wasn’t the relationships that Bill had for decades. They know him and trust him. We started creating the film and honored Bill’s friendships; we started with a handful of artists like Kye Fleming, Jess Leary, Mary Gauthier, and Bonnie Baker.

We are aware of the fact we are gay, but we are still men and realized the importance of providing the safe space that these women needed to make the film happen authentically. Once we started exchanging with the cast and artists, we immediately felt how sacred of a project this was. It was a significant documentary, and we had to honor it and respect it as best as we could. We were intentional in creating a space that was inclusive and allowed the artists to be safely vulnerable. We hired a gay woman to be the Director of Photography, and a woman to be the Editor.

Can we talk more about the diversity of the artists in the film?

T.J.: The women in the film aren’t an entirely exhaustive list of women in southern music; it’s a portrait of a group of women and their experiences. We tried to reach as many people as possible to include them, and we were able to find a cross section of experiences. Like, Ruthie Foster. She’s a Black blues singer who has been nominated for three Grammys and won seven Blues Music Awards. She shares, “It’s not about being gay, it’s about love. It’s about opening yourself up to someone and being able to write about it.”

The film includes a person who transitioned, and we were able to make a documentary short, called The Gender Line about Cidney Bullens. Cid played in Elton John’s band and had a very compelling history to share as a person who has experiences on different sides of the gender lines in the music industry. Cid didn’t quite fit the film, so the short gave an important and distinct beginning, middle, and end to share with audiences about him. After the film screening once, a young woman raised her hand and said that the story of Cid made her uncomfortable. So, I said “good” to myself. Film is supposed to challenge our assumptions. Good art should challenge early perceptions for people who may not otherwise have the opportunity to see different stories.

Bill and T.J.: We realized how deep the experiences went. Some women could fly under the radar and just be available professionally and push aside their love life and who they were. Others were offered a major record deal, but they couldn’t morally hide who they were, so they chose not to take the record deal. They missed out on record deals and seeing their dreams come true, but they also were not willing to sacrifice their morality and stay in the closet…so they just continued to write music for other artists. In some ways, they were facing a list of consequences because the industry and the audiences weren’t welcoming so they had to make significant sacrifices because they are gay.

Bill and T.J.: One of my friends, it’s kinda heartbreaking really, came to Nashville to be a country music singer. She settled for being a songwriter and chose not to play the closeted game because the industry couldn’t accept her in her entirety. So her music experience was heavily impacted. Another artist shared that her sexuality didn’t really play a big part of playing her music, and shared that she can reach diverse people because music is universal. The film does highlight some of the different experiences and ways that women navigate the scene. There had been a bit of a “don’t ask, don’t tell” culture in southern music industries, especially country music. People in the documentary are ground breakers. They lead the way. Our country is changing, and I hope that inspires country music audiences.

T.J.: We found that a lot heterosexual women audiences in early test screenings were connecting with the artists in the film as well. It was a common experience shared around the impacts of patriarchal culture and accessing “success.”

What are some other artists and pieces of work that our readers should know more about?

T.J.: There is a documentary called Wish Me Away about Chely Wright.

Bill: There is a beautiful long song called Loving Her by Katie Pruitt.

Bill and T.J.: There’s a song that Diane Davidson wrote that hit her career kinda hard. She said, “I expected people to be better than that, because I hadn’t changed.”

Participating in this film reignited many of the artists; they were inspired by each other and their own talents to get back to writing and recording. That was really moving.

What are some of your inspirations?

Bill: For me, it was my grandfather Big Wes. He was a small time attorney, and I loved him dearly. He was kind, generous, and helped others. Always been my idea of an inspiration.

T.J.: I’d say the women and Cid in our film inspire me greatly. No matter how big the obstacle, they just keep persevering. They had so much to overcome in this industry. They are talented and courageous.

Bill: I would start a foundation for the environment.

T.J.: I would continue to make films about things that matter. Ken Burns recently did a mini-series about country music, and he shared Willie Nelson’s quote about country music, “I think most art comes out of poverty and hard times. It applies to music. Three chords and the truth — that’s what a country song is. There is a lot of heartache in the world.”

What is the greatest gift you can give someone?

Bill: Respect. To whoever they truly are.

T.J.: To authentically “see” a person.

A note from the author:
Thank them for “seeing” the artist and working to connect so audiences to these artists. You can support OutHaus by donating here to help get some of the artists to the film festival in San Fran this summer.